Want to know how resilient and useful Mr. Sticky's Underwater glue is? Read the following testimonial from R. Burr who used it on his crab pots in 20-50 feet of salt water and find out!

"I needed some type of water proof adhesive to keep the snare legs secure on the bait box, yet have a slight flexibility to it. It works great, even in saltwater! This product doesn't deteriorate like typical epoxy would. " R. Burr 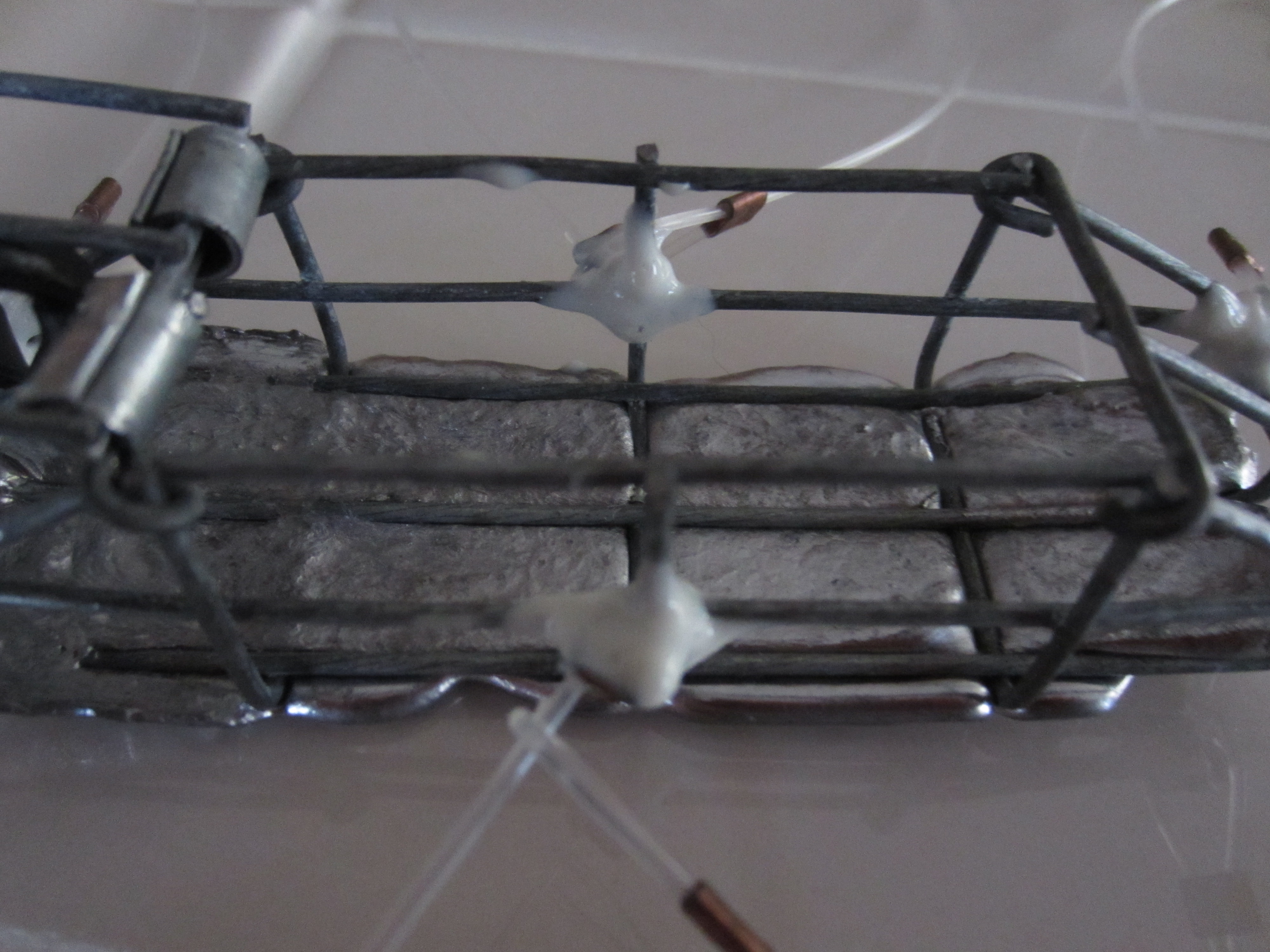 As to the recommendations... how do you say we use it for almost everything?  From motorcycle sidecar repair, water pik repair,  help with plexiglass,  fishing rod ferrulels , around rivets in an aluminum boat, and many I can not recall at the moment.  If anything comes up that has a neat picture I will surely send it to you, it seems like the website is coming along nicely, good luck!

I just purchased a house with a pool and decided that I was going to cut cost and do the maintanence myself.  The pool includes a dedicated vacuum line with a port on the sidewall underwater that is intended to connect to a vacuum robot.  I purchased a top of the line robot and connected it to the port.  I then valved the suction on and was devastated to learn that it was sucking air from someplace in the line.
Since the suction pipe is buried in the beautiful flagstone deck I had no idea where it was and I feared I would need to start tearing up the stone.  Well after hours of research I found that the leak was at the underwater fitting right at the connection port underwater.  The access was limited but I thought I could repair it with the right stuff
I researched what type of adhesives could seal the leak without draining the pool.  I wanted the seal to remain flexible but strong.  Mr. Sticky's was the perfect solution.  I made a few practice runs on pipe in my garage to gauge the working time and properties.  I then put on my scuba gear and performed it on my fully filled pool.
It worked GREAT!  No leak at all even at full suction.
Im an Engineer for a large aerospace company and I know adhesive materials. I am very impressed with this stuff for underwater pool repairs.
Thanks Art and thanks Mr. Sticky!!!!!
Dante
Los Angeles, CA

Briefly here is what I have done with my wife's Prelude.

Mark the position of the anchors and saddle as Mike Yee suggests on his web site. (http://www.mikeyeeoutfitting.com).

Remove the thwarts and saddle and air bags etc.

Follow the instructions for the polybonder very carefully. The flaming process is particularly important. Watch the video on Tap Plastics web site (http://www.tapplastics.com/info/video.php) Do not skimp on the polybonder. My first two bonds failed and I suspect that it was because I skimped on both the flaming and polybonder. Subsequent bonds can be pulled hard enough to distort the boat and have withstood paddling trials. Using 2" D ring anchors it takes about half of a set of 30cc tubes to get a good bond, so for 6 bonds get 2 X 30cc packs. I mixed it on the marked area of the hull where the D ring was going, after flaming.

While the saddle was out I decided to put some 3/4" domestic water piping through the saddle to aid water flow after a roll. I marked 4 or 5 positions 2" above the bottom of the saddle on one side, using set square transferred the markings to the other side, inserted a wooden kebab skewer from one side to the other and when that was lined up on the marks drilled a 1/2" hole through using a round surform file ,working half way from each side using the skewer to guide the surform file. It was then very easy to push though 3/4" pipe and cut it to length.

The two bonds that failed were the ones beside the saddle and I subsequently used a piece of nylon climbing tape though one of the pieces of water pipe to anchor the thigh straps. This has worked very successfully.

Since all our w/w kayaks are polyethylene this may also prove useful for outfitting them as well.

A local customer inquired about Mr. Sticky's Poly-Bonder Adhesive being suitable for a polyethylene gas tank to adhere to his motorcycle. Here is his testimonial:

Hey guys, following HuskyDude's lead I decided to do the shroud cut. grind and mount on my IMS tank. I found a local guy here in the Sacramento area that makes and sells his own epoxy that adheres to polyethelene. His names is Art and he has an on-line company called MrStickys.com. I called him up and went to visit. Great guy and very helpful. He gave me the whole story of polyethelene and how his stuff works. It's got enormous shear strength as well as having an elasticity factor that makes it great for a high vibration and potential impact environment. They key to his products adherence to Polyethelene is to "flame treat" (explained on his site and the packaging) the surface prior to applying the epoxy. Yeah, a little scary with fuel tanks, but I did mine prior to it's first fill. The stuff is white when mixed (and dried) and has the consistency of a very thick paste, or caulk when wet, so no running or oozing. I used 3 tubes and had just barely enough. I had a little bit of the white epoxy that showed at the front of the shroud once dried, but I just hit it with a gloss black auto touch up paint bottle brush and it blended right in with the tank. Attached are couple of photos of my install. I'm very pleased with the results. Thanks for the great idea HuskyDude !!!! 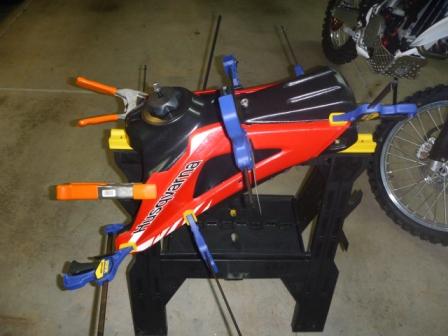 Trim being bonded to tank 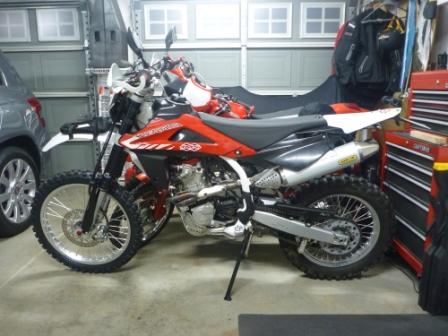 The following was sent to us by a customer who used the Mr. Sticky's Underwater Glue to repair a leak in her aquarium:

"I don't think I let you know how impressed with your Underwater Glue I Was. The leak in my aquarium is fixed, and the trick with the wax paper is genius. If the fish could write, I know they'd thank you, too."

I discovered Mr.Sticky's Underwater Glue a few years ago, by accident. Since then I've bought around 20 tubes and have used it successfully on almost everything imaginable. Originally, I pretty much used it as a last resort, when other glues didn't work. But, I soon discovered that it worked on everything that I have experimented with so far! Instead of a last resort, it quickly became my number one choice for almost all repairs.

Some quick examples of some of my repairs include: pool skimmer basket, skimmer cover and many other pool repairs; grass trimmer spindle; motorcycle turn signal stem repair; coffee cups and dishware; "teeth" in cd jewel case; plastic water pitchers; Frisbees and many other toys; so many other items!!!

Thanks for a fantastic product,

I don't think I let you know how impressed with your Underwater Glue I Was. The leak in my aquarium is fixed, and the trick with the wax paper is genius. If the fish could write, I know they'd thank you, too.